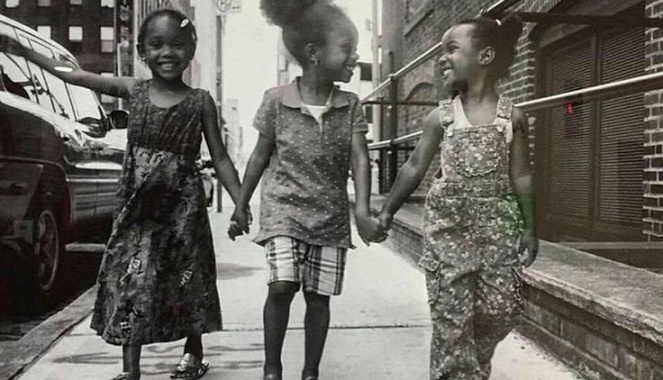 We were taught in science class that humans are merely the top rung of a cosmic evolutionary ladder. Such thoughts never jived with what my own eyes tell me. The spark of life in human beings is miraculous. Birth of every girl and boy cannot be reduced to “strengthening the species.” Human life is much, much more.

These three girls dwell in a concrete jungle, but look at their big smiles and bright eyes! Human beings find joy the world over. Not dependent on environment, not tied to abundance of things. The Creator places the spark of life within every person.

Yes, the human spirit is an incredible creation of God. We should nurture that spark in everyone we can. These three kids feel free and safe and connected with each other. This is what the good Lord made us for – connection though healthy relationships. It is the driving story of every page in the Bible.

Are you ready to investigate?

This “spark” can be seen in the darkest of circumstances. Our good friend Jeremiah has been slandered as a weak complainer by people who have made little effort to check him out. Truth is, he was nearly driven mad by love for his people, people who were foolishly destroying themselves.

“God’s spokesperson, Jeremiah, deserves a gold medal. As a man, servant of The Most High, citizen of a small, troubled nation, an activist for social concern, and a bastion of hope for the future – very few human beings should stand in honor with him.”[1]

“The word ‘incredible’ is too weak to describe this man. Surviving avalanche after avalanche of peril, his daily diet was angst. A rope he was, in a massive tug-a-war between God and his people. Scars, both emotional and physical, accumulate. But rather than crawl into a shell to ‘survive’, he expended himself to prevent his nation and people from disappearing. He cared for his people and grew to care for his God. His story is profound.”[2]

Also available at amazon.com and other retailers.